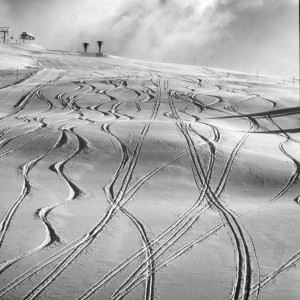 My right shoulder muscles have been abused by the circumstances of life. I had breast cancer on the right side, resulting in the removal of thirteen axillary lymph nodes. This caused scar tissue and tightness under my right arm. Then radiation therapy (don’t gross out here) melted the underside of my skin, causing it to fuse to the bone where it is permanently stuck. This causes some tightness across my chest. Then, I had reconstructive surgery where a large portion of muscle in my back was dissected and tunneled forward under my arm to my chest. In fact, the procedure is called an LD Flap – LD for latissimus dorsi and it’s a flap because the section of muscle is left attached to its blood supply. This means that if you press in the exact right spot on my back, I feel it in front. It also means that when everything comes together wrong and I have pain, it’s a shooting pain across my chest and an agonizing ache around my shoulder blade. It doesn’t happen often, but when it does I can barely function.

This is where I was last night. As my husband massaged the shoulder to try and relieve some of the tension so I could sleep, I reminded him that four years ago I was in the hospital. Four years ago, on July 2nd, I spent six hours on the operating table having a bilateral LD-Flap. We talked briefly about everything that led up to that point, and then everything that has resulted from it, and I found tears pricking my eyes as I said, “Stupid, stupid cancer.” But then I told my husband that it is what it is and there’s no point in feeling sorry for myself, that it serves no purpose. I need to buck up and get over it. But my husband, very gently, said, “LaRae – I don’t think you’re feeling sorry for yourself. I think you’re feeling human.”

We turned out the light and I lay there thinking about those tears. Was it “human” to cry four years after the fact or was there something wrong with me? I thought about my story, the one I didn’t write but was faced with living.

I thought about the fact that I had immediate reconstruction after my mastectomies. I had tissue expanders put in that were meant to gradually stretch the skin, eventually being replaced with silicone implants. As far as I got with that procedure, I remember being very happy with how I looked and how I felt. But then I developed a life-threatening staph infection. By the time I was admitted to the hospital I was feverish, my skin was so sensitive I felt like I was being pricked all over by a million needles, my joints ached, I was nauseated and I couldn’t lift my head off the pillow. I was becoming septic. One expander had become infected and the other was surrounded by fluid that was likely to become infected, so they had to come out. It was only after the fact that my nurse told me I had scared the living daylights out of everyone. But the real blow came when I thought the hard part was behind me. My surgeon informed me that the antibiotic hadn’t really “killed” the staph. The staph had colonized right above my heart and for the rest of my life my immune system would engage in a freakish dance with the bacteria, maintaining a delicate balance of health in my body. But we could do absolutely nothing to disrupt that balance. It meant he wouldn’t reopen the wound. It meant that I couldn’t try expanders again. That ship had sailed. I had done my research beforehand, so I knew my only other options for reconstruction involved cutting muscles in my belly or my back, both of which seemed utterly barbaric. I was devastated.

I thought about the day 14 months later when I finally went in for the LD-Flap, and the ambivalence I felt. I didn’t want the surgery. I was dreading it. But I didn’t want to continue living as I had for the past year, either. The two times I attempted clothes shopping had ended with me crying in the fitting room because nothing fit right. I had an abrasion, a permanent bruise really, from the seatbelt in my car constantly rubbing across my sternum. I had to wear a T-shirt over my swimsuit to go to the pool with my girls because my suit gaped in a shocking fashion. And one time my little one, two years old at the time, walked in on me as I dressed after a shower. Her eyes widened as she caught sight of my scarred chest and she said, “Oh, Mommy. How did that happen?” I had no answer. All I could think is, “How, indeed?”

I thought about waking up in the operating room, with everyone frantically running around, hearing words like “pooling blood” and “venous congestion.” I heard the anesthesiologist ask, “Should I re-intubate her?” as I was jerked around and bandages were ripped off. I grabbed the hand of the O.R. nurse and asked what was wrong. I remember his classic deer-in-the-headlights look as he realized I was awake and talking when they weren’t finished yet.

I thought about that first night in the hospital. The pain was tremendous, and something I learned much later is that I metabolize drugs extremely quickly. This is why with five surgeries requiring general anesthesia, I woke up clear-headed and completely aware while still in the O.R. three times. This hyper-metabolism impacts the way my body responds to narcotic pain meds. So, although I had dilaudid in a pain pump, it was having virtually no effect. My nurse that night was a heavily-muscled, dark-skinned, bald-headed man named Kendall, who looked more like a bouncer than a nurse. He didn’t smile at me one time. But he was God’s angel to me that night. He knew pain and he knew I wasn’t faking it. He gave me six “rescue doses” during the night while he tracked down a physician who would change my orders, ultimately doubling the amount of dilaudid in each dose. When I got that first doubled dose, I felt the blessed, merciful effects as the medicine hit my bloodstream. I smiled at Kendall and said, “It’s finally working.” He told me he’d given me enough medicine to knock a man twice my size flat. He said that people receiving a normal dose of dilaudid hallucinate and try to climb out the window – yet, I wasn’t even slurring my words. All I could do was thank him for advocating for me, then thank God for giving me the bouncer-nurse instead of some shrinking violet who wouldn’t have fought for what I needed.

I thought about coming home, and how I cried multiple times every day for two weeks. I think my husband actually began to worry that I was having some kind of breakdown. The sanitized literature they gave me describing the surgery said, “Most mastectomy patients find deep emotional satisfaction from their reconstruction.” But I felt one emotion and one emotion only ~ regret. The pain was out of this world; I couldn’t lift my arms over my head; I had to sleep propped up; I couldn’t dress myself; I couldn’t wash my hair. I absolutely hated how everything looked. I thought I might never feel like my joyful, even-keeled self again.

But last night I wasn’t crying over any of these things. It took three more surgeries but I did achieve results I can live with. And all these events, difficult though they were, were simply moments in time and they have passed. It’s over. They’re just distant memories. No, my tears were caused by something real that still lives in my heart. It’s like an echo. It’s like a scarred-over wound that still occasionally feels tender and gives pain. It’s like tracks through new-fallen snow – the landscape is marred; it will never be the same. As a Christ-follower, I have had some very well meaning Christians tell me, “Give it all to Jesus. Just lay it at His feet.” But I don’t know how to do this. Seriously, how do I unburden myself when my very being is inextricably tangled up in the whole mess? I don’t know how to give it away. So instead, I seek to trust Him. I look to Him and His Word for strength. I strive to live in my joy. And I keep my perspective.

You see, I could fill an entire page (maybe the back, too) with problems and challenges I still face because of my cancer. Yet, put on a great balance, all these things will never outweigh what is on the other side of the scale. I am alive. Sometimes my days flow easily. And sometimes I struggle to live the life I want to live, to be the mom, wife and friend I think I should be. Some days it’s hard to joyfully face life with these echoes reverberating, sometimes manifesting as physical pain. But each and every day, I am thankful for the opportunity to try.